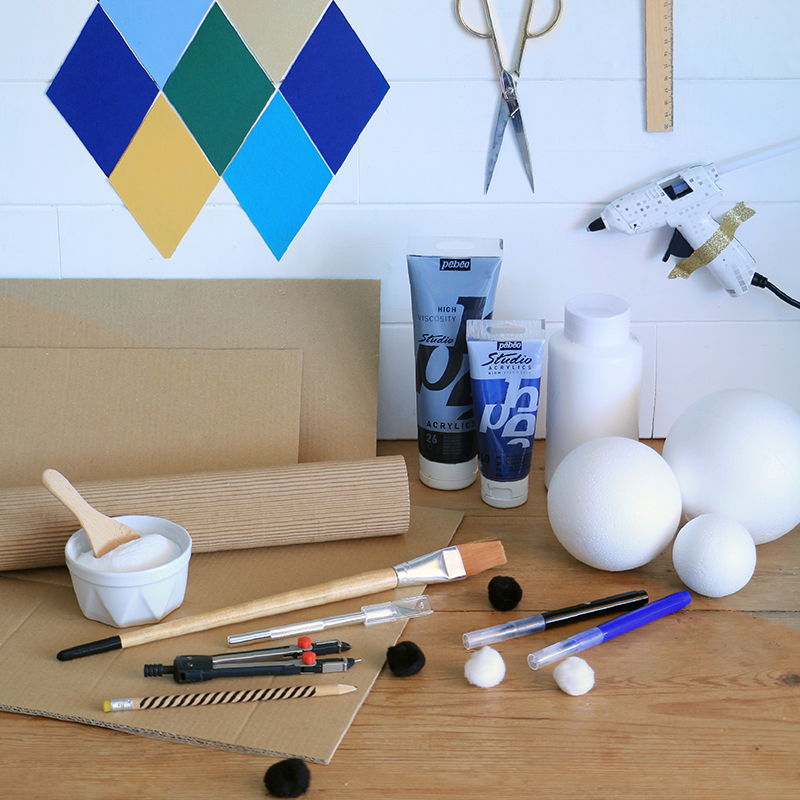 1. Shape cardboard into tubes that will be bodies and heads of characters. First cut large rectangles of 5.5 x 35cm and 25 x 35cm high (for Columbine’s body you must shape two small tubes of 10 x 35cm and 7 x 35cm). Roll these rectangles to shape tubes with diameter 5cm for the body and 6cm for the head. Glue these tubes with hot glue. 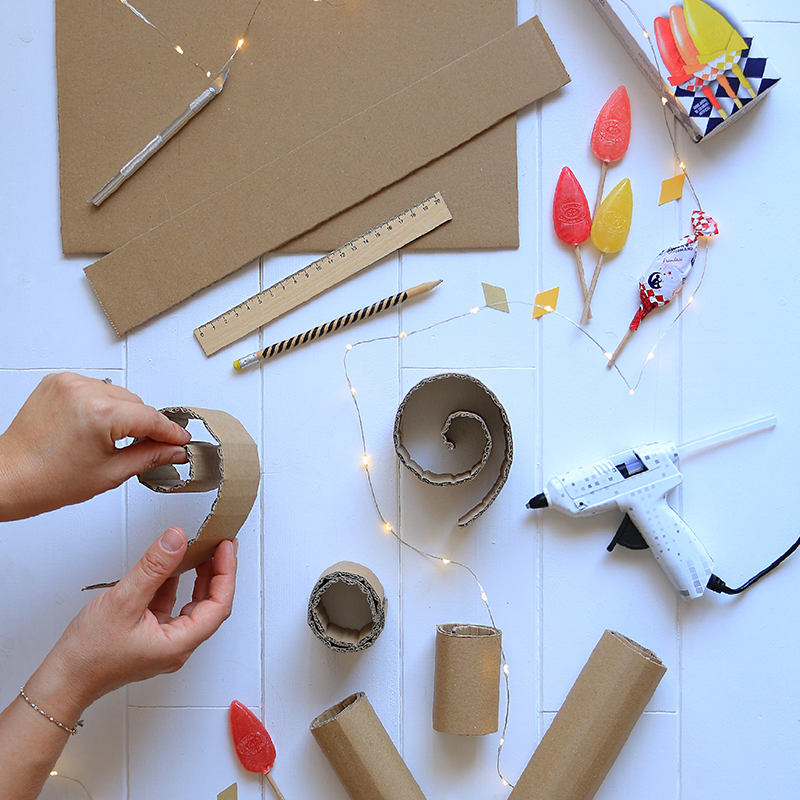 [NB: The cat will have a single ruff with diameter 8cm.] 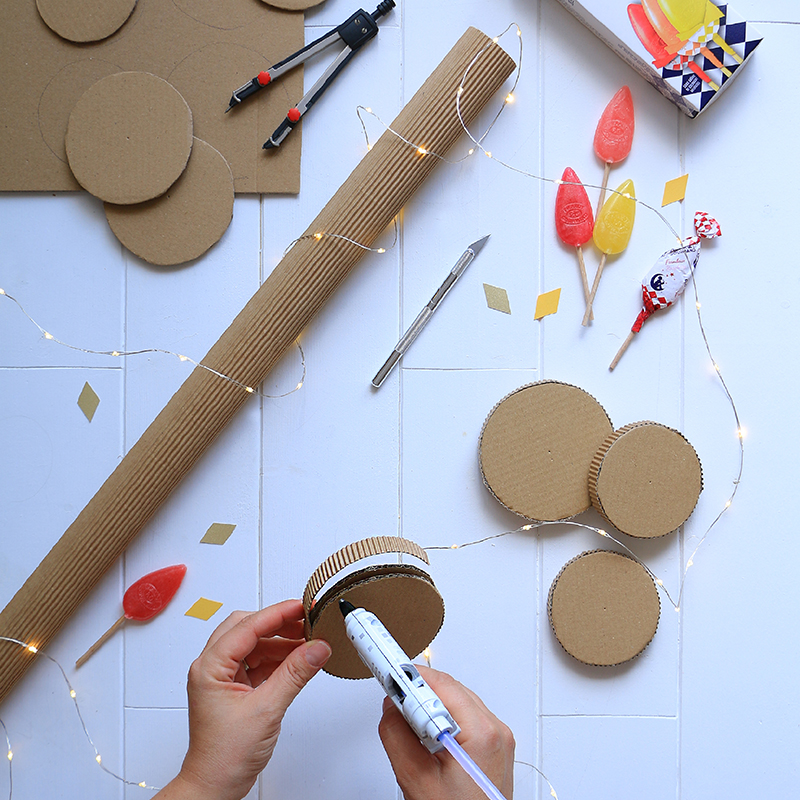 3. Create the moons. Mix 2 tsp. of white paint and 2 tsp. of bicarbonate of soda. Put balls on toothpicks and paint polystyrene balls with paint/bicarbonate mixture. Add here and there some more paint and shape craters. Let it dry and glue the smallest moon on a carboard tube of 25cm with hot glue. The other moon will be used to be launched and must be varnished. 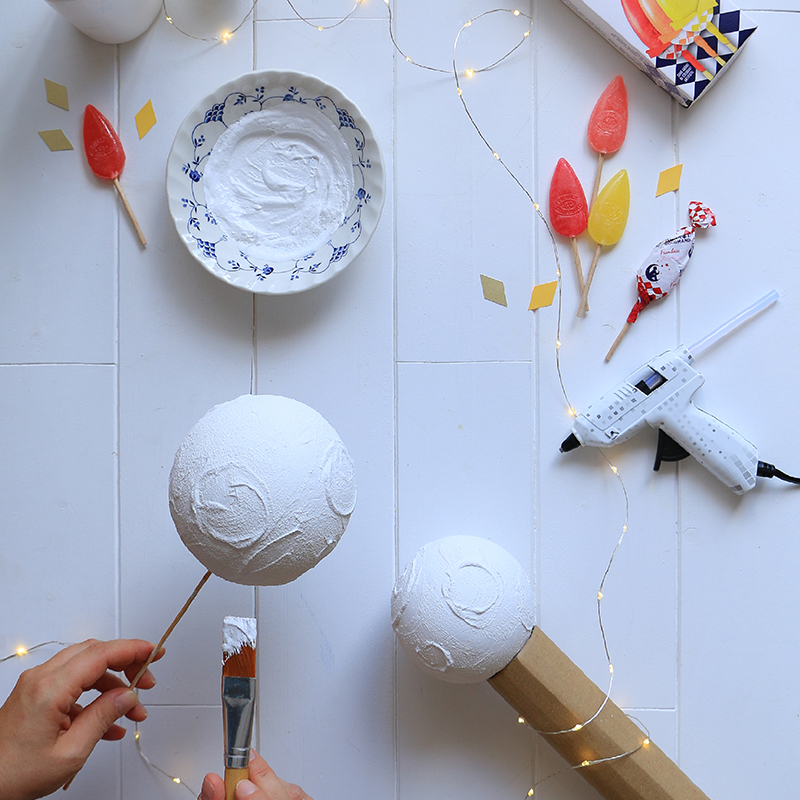 To create the cap, cut in two parts a polystyrene ball with diameter 6cm using a big knife, glue it on the top. 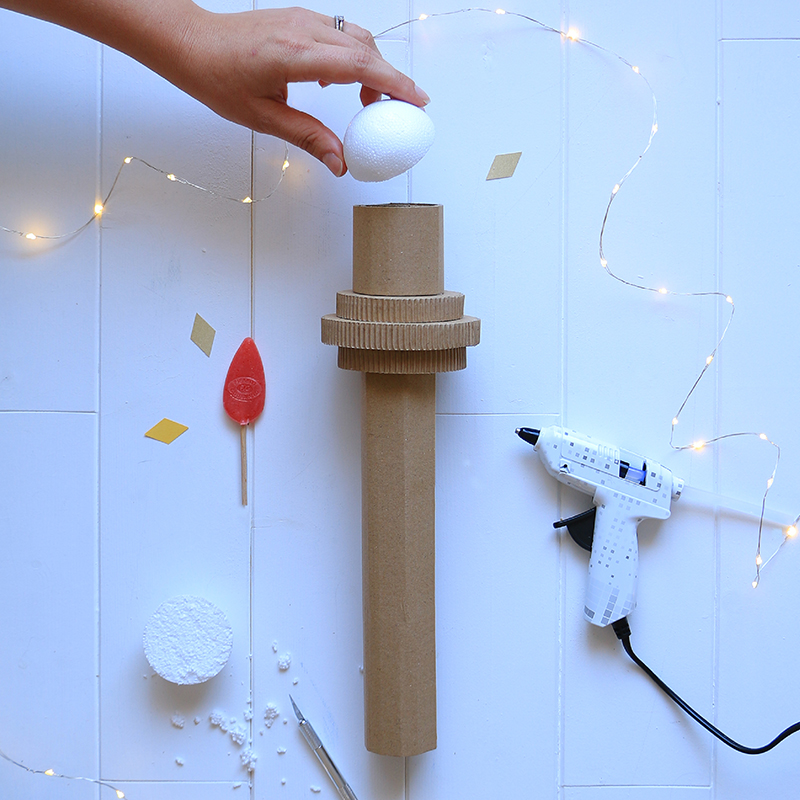 5. Harlequin: Do exactly the same as for Pierrot’s body.

To create the hat, cut a disk with diameter 6cm and then glue it on top of the head. Cut 2 "butterflies" of about 14cm long and 3.5cm high. Fold them in two and glue them back-to-back on a cardboard disk with diameter 6cm. Then glue this disk on top of the head. Cut a thin strip of corrugated paper and then glue it on the base of the hat for a nice finish. 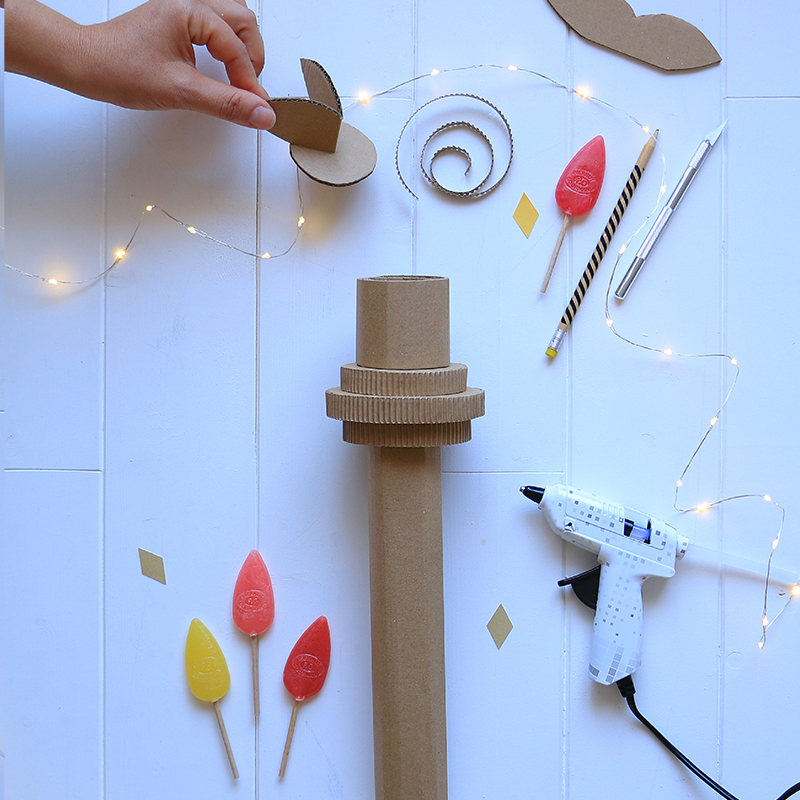 Create a cardboard hat by cutting a half-circle with diameter 15cm that you will roll to make a cone. Hold it and glue it using hot glue and then glue it on top of the head. 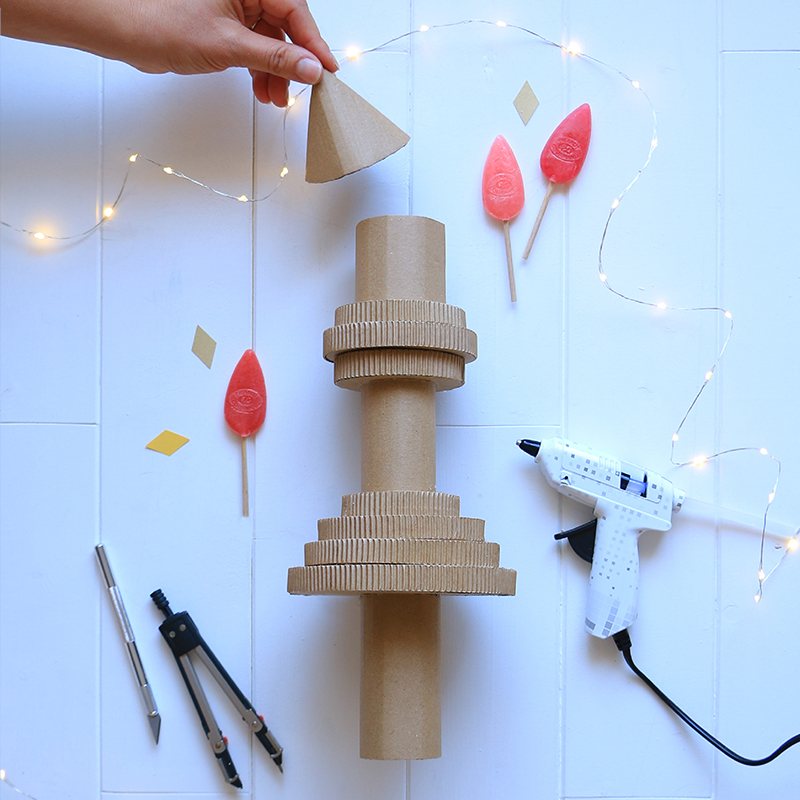 7. Black cat: Put together and successively glue starting from the bottom a tube of 25cm + a disk of 8 cm + a tube of 5.5 cm (the head). Cut a corrugated cardboard disk with diameter 6cm on which you will glue two ears (follow the grooves of cardboard to glue ears).

Draw the shape of a cat tail without forgetting two rectangles that will be used as notches. To add it, do two cuts with box cutter in the big tube and insert notches in cuts. Hold it all with some glue on the back. 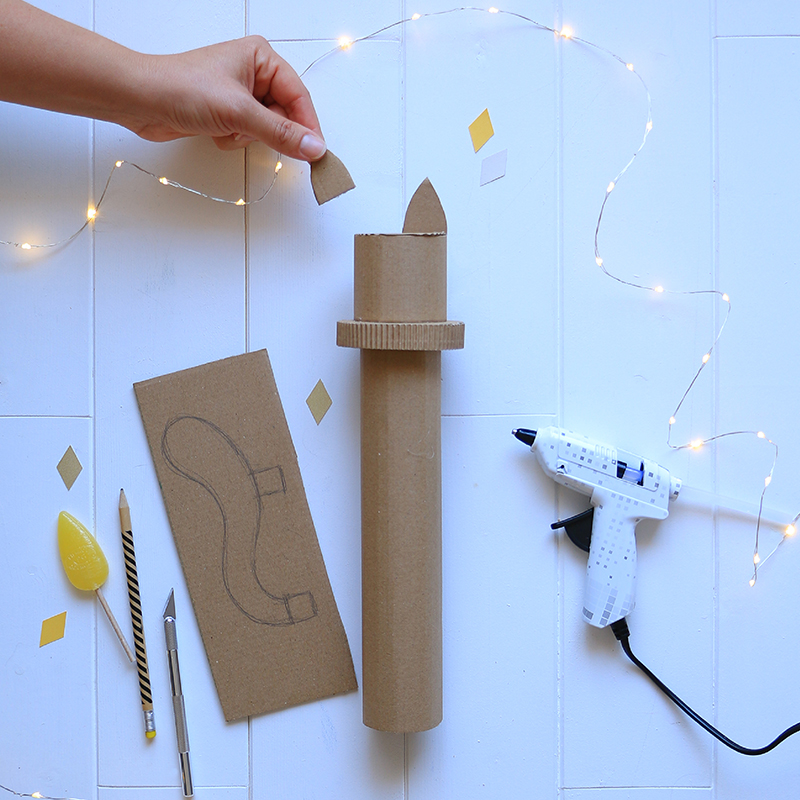 8. Decorate and customize skittles using your imagination and your kids’. Give life to your characters using paint, pompons, felt pens or colored paper. Pompons and black hat for Pierrot, a nice colored pattern for Harlequin, golden stars to have a shiny moon…

A tip, to keep your skittles as long as possible… apply a layer of satin varnish! 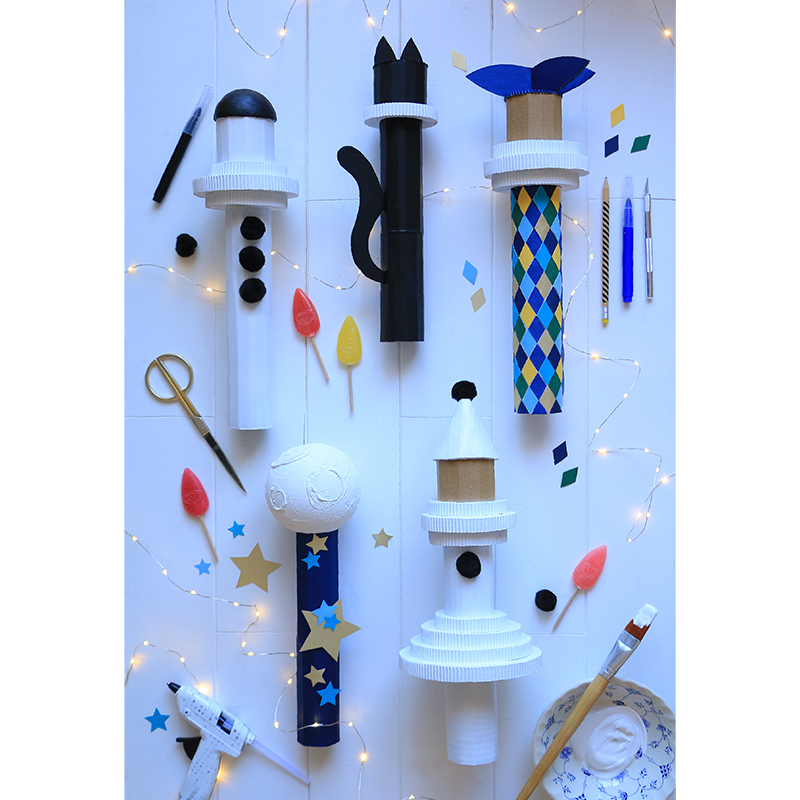 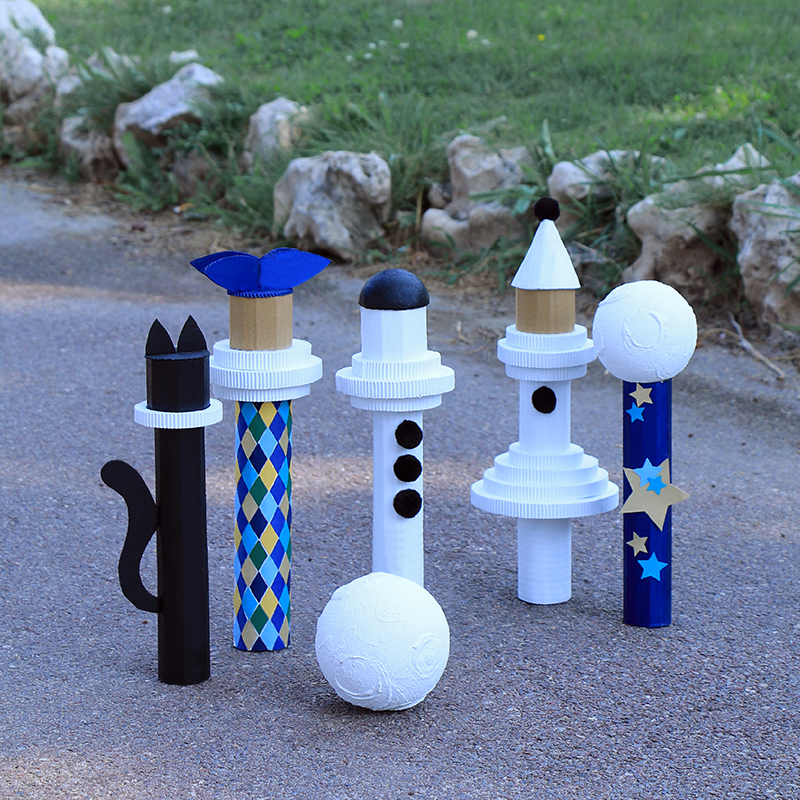 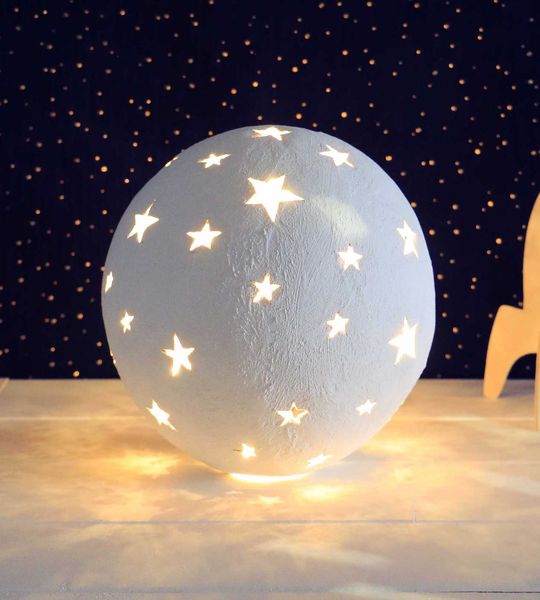